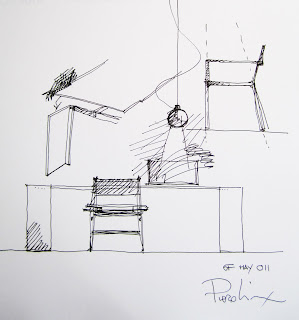 
Evoking a strong sense of a time and place that is as much nostalgia as actual, Patricia Urquiola’s Klara looks as though it belongs in a milieu of bungalows, roadsters and palm trees. And justly so: Urquiola’s inspiration is California of the ’50s, a place synonymous with movie stars, fast cars – and visionaries like Richard Neutra and Charles and Ray Eames. Introduced within the past year, Klara has already earned a place on Dwell ’s list of nominees for its first Modern World Award.


Juxtaposing strong textural elements with flat finishes and fabrics is a favorite technique of the designer. In Klara, Urquiola has created a chair with distinct components, permitting the use of different fabrics, leathers, dimensional weaves and canes to create a harmony of differences. Both functional and decorative, Klara successfully blends decorative art, craftsmanship and industrial design. The complete collection will include the dining chairs and barstools, and tables in a range of sizes introduced this year at Salone del Mobile in Milan.


To vote now click here.
by DZINE No comments:

Samantha Hartley Hewitt was honored with this sketch from Piero Lissoni. 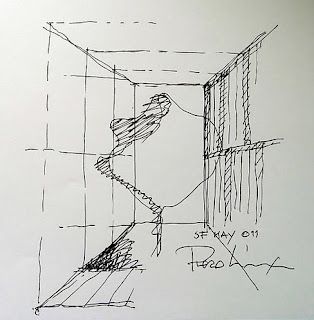 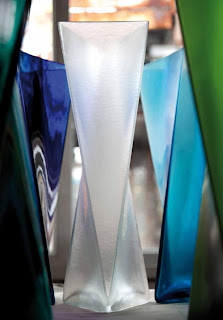 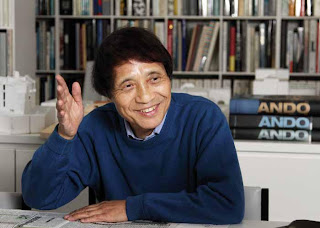 “ From the time of its establishment, VENINI has continued to boldly take on challenges in its pursuit of the timeless theme to fuse tradition with innovation. The object made to commemorate VENINI’s 90th anniversary symbolizes VENINI’s esteemed creative spirit as an “encounter” between the 1000-year-old traditional Venetian glass craft techniques and pure geometric form. The object is composed from three elements of the same shape. These elements are triangular columns with curved surfaces that are generated from inverting isosceles triangles between the top and bottom of the shaft. The simple geometric operation conducted on the distinctively textured Venetian glass creates a glass product of a completely new character. By bringing together three of these elements in various arrangements, glass objects are made that take on different expressions with the light. The Venetian glass tradition that has been maintained for a thousand years will surely continue to live on through its further “encounters” with fresh, inspirational designs.” 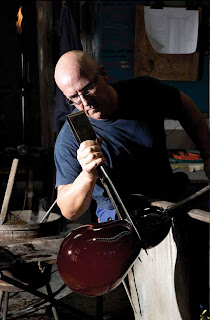 The manufacturing of “ANDO” requires the contribution of one glass Master and four helpers for a number of hours, utilizing tools to shape the object, as they were used centuries ago. 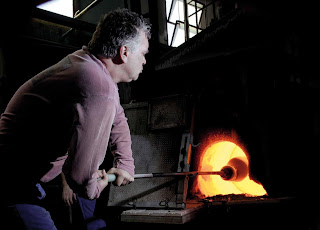 The creation process begins with the fusion furnace that transforms the mineral sands into boiling magma, in which the fusion temperature gives the material a strong orange color.  The glass “Master”, a title only received after at least twenty years of experience at the furnace, manually rotates the cane, so that the vitreous mass maintains the desired shape.  During this process, the object must be continuously heated in order to continue the shaping. The temperature of the glass during all working stages cannot be under 800° C. 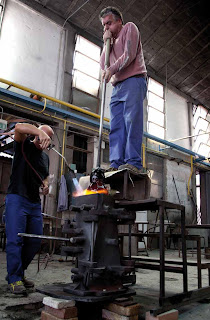 Once manufactured in the furnace, “ANDO” keeps a temperature of 500° – 600° C and must be cooled slowly, in order not to create internal tensions that can cause breakages. This slow cooling is realized in some furnaces of “recooking”, the so-called “muffle furnaces”. The work cools gradually inside the “muffle” for twenty-four hours. 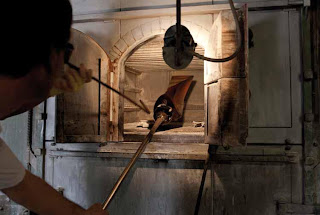 Once "ANDO" has reached room temperature, the art-piece begins a cold-working stage called “grinding”. The “grinding” is a very important stage in the manufacturing of glass, of which there are many grinding techniques to create refined effects on glass surfaces. The grinding Master proceeds with slow and wise movements in order to complete the art-piece. Numerous grinding techniques are part of the historic and artistic heritage of VENINI, as well as the unique colors of VENINI, are handed down from generation to generation. 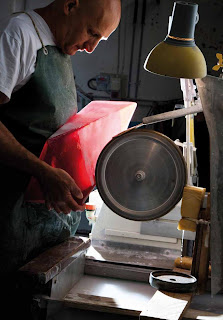 Perfect evidence of the ability in works of glass, “ANDO”, is an absolute synthesis between shape and chromatism. 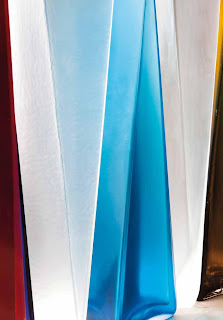 Piero Lissoni provided this sketch for Lara and Chris Deam. 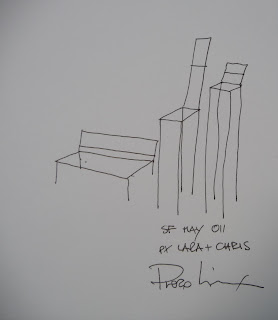 Elegance. Simplicity. Functionality. DZINE represents a philosophy of design that is truly contemporary – one that encompasses not what is merely new, but what is essential and timeless.

A furniture showroom dedicated to the best of European design, DZINE occupies an airy 15,000 sq. ft. in the San Francisco design district. Whitewashed walls and bare concrete floors create a neutral backdrop. The effect is minimal, yet inviting. It is a space that places emphasis on the line, proportion and detail of the furniture itself, reflecting the respect for the integrity of each design and its creator.